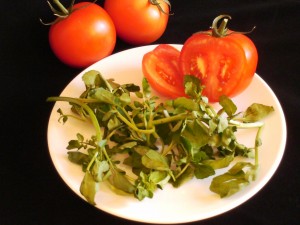 have lower rates of cancer and heart disease. Cruciferous vegetables are those whose flowers resemble a cross such as broccoli, cauliflower and watercress

. (affiliate link) All of these vegetables are thought to help reduce the risk of both cancer and heart disease.

Watercress, a member of the Mustard family, is a hardy perennial

(affiliate link) that grows best in gently flowing cool water. With its tiny delicate leaves and thick stems watercress looks quite a bit different from other salad greens.  A casual observer might think it is more like a weed you would pull from the garden.

Watercress is a dark green, leafy vegetable which is packed with beta carotene

and very easy to incorporate into a healthy diet. Watercress is loaded with antioxidants

which are important in lowering your risk of heart attack, some cancers, and cataracts.

How to Use Watercress

Watercress is best eaten in its natural state, fresh and crisp.  It contains phenethyl isothiocyanate (PEITC), a natural compound that scientists believe helps in cancer prevention. Watercress looks a little different than most other greens you may put in a salad but in spite of its delicate appearance, it has a very pungent, peppery flavor.

A one cup serving of watercress provides 24% of the daily value for vitamin C which is another valuable disease fighting antioxidant.  Antioxidants help sweep up cell damaging oxygen molecules from your body.

Easy to Prepare Recipe for Watercress

Rinse the watercress under cold water and cut off and discard the biggest stems. Dry gently with paper towels place the watercress in a large bowl. In a small bowl combine mustard, vinegar, yogurt, honey and oil. Whisk until smooth and season to taste with the pepper. Pour over the watercress and toss gently to coat. Makes about four servings.